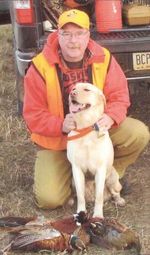 James A. Baker, Sr., 54, of 685 Moose Ridge Road, Woodsfield, Ohio died Saturday, December 11, 2010 upon arrival at the Barnesville Hospital, Barnesville, Ohio.
He was born at Cleveland, Ohio on October 7, 1956 a son of the late Thad and Stephanie Urbanik Baker.

He was a retired wildlife officer and district supervisor for the Ohio Division of Wildlife; a member of the St. Paul’s United Church of Christ, Woodsfield, Ohio; a member of the Woodsfield Volunteer Fire Department; Fraternal Order of Police; the Ohio Game Protectors Association; and a member of the Lazy River Dixie Land Jazz Band.

He enjoyed hunting, fishing, kayaking, hiking and the outdoors along with his dog, Willo.

In addition to his parents, he was preceded in death by one brother, Terry Baker.