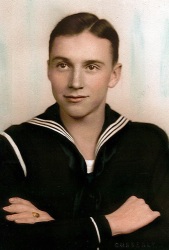 Robert E. Sturgeon of Upper Sandusky, Ohio died surrounded by his family at 6 pm Wednesday, October 15, 2014 at Wyandot Memorial Hospital. He was 88.

Born March 4, 1926 in Champaign County, Ohio, he was a son of Carl and Nettie (Rogers) Sturgeon. On January 10, 1946, he married Erma Jean Closson in the parsonage of the First Christian Church in Charleston, Ill. She survives in Upper Sandusky.

He is survived by six children: Kathleen (Thomas) Creger, William (Deb), and Stephan, all of Upper Sandusky; Ruth (Michael) Mistic of Medina; Michael (Karla) of Sunbury; Robert, Jr. (Rosanne) of Divide, Colorado. He is also survived by 14 grandchildren and 18 great-grandchildren. He is survived by one brother, Roger.

He was preceded in death by an infant brother and a daughter-in-law, Catherine (Katie).

He worked for the Ohio Department of Natural Resources, Division of Wildlife for 44 years serving as area manager at Killdeer Plains Wildlife Area for 36 years, retiring in 1989.

A member of the American Legion Post 225 and life member of AMVETS Post 777 and VFW Post 2482, he served with pride for many years on the Military Honor Guard. Accompanied by his son, he was a participant in the Honor Flight to Washington, D.C. He enjoyed hunting, fishing, traveling with his family and bowling on the Harpster Bank team.

The funeral service for Robert E. Sturgeon will be at 11:00am, October 18, 2014, at the Marseilles United Methodist Church, and will be officiated by the Sturgeons’ sons. Burial with graveside military rites will be in Chandler Cemetery, Marseilles.

Visitation will be Friday from 5 – 8 p.m. at Lucas-Batton Funeral Home, Upper Sandusky, with a Masonic Memorial Service to be held at 8:00pm

In lieu of flowers, memorials may be made to the Wyandot County EMS, the Marseilles United Methodist Church or the Alzheimer’s Association of Northwest Ohio in care of Lucas-Batton Funeral Home, 476 S. Sandusky Ave., Upper Sandusky, OH 43351